“Les ballets C de la B wants to invest in the next generation by taking in residents who will get the opportunity to be coached in their work by director Alain Platel and Hildegard Devuyst, Platel’s dramaturg for more than 20 years. The basic idea are one-month-residencies in one of the studios at les ballets. There are no prefixed artistic conditions, no exclusives when it comes to form or movement language. Young artists who think their work would benefit from a residency.”

During my Co-Labo residency I worked on a new presentation form. I showed works and objects I wanted to share with a small audience. While I’m unwrapping them I tell their stories and build up an ephemeral exhibition. The result of this work was shown during the under construction festival in Ghent (Belgium) in February 2018 and in Ramallah (Palestine) in May 2018.

In December 2018 a second version of Zaher was presented in Bozar (Brussels). Zaher II is a co production by Bozar and Connexion. During a second series of travels in Palestine, mainly in El Khalil (Hebron) and Nablus, I made a second collection of objects and stories. This performance is a new approach, using a new setting by Peter Deblieck  and using The dice player, a poem by Mahmoud Darwish as an introduction. 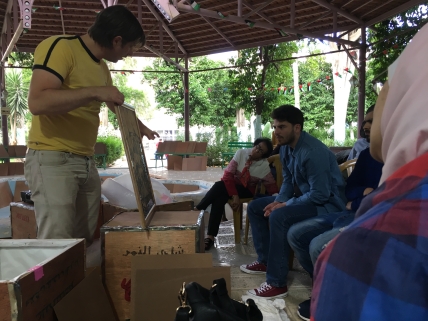